Smokinya FEST – What would you do if you weren’t afraid? 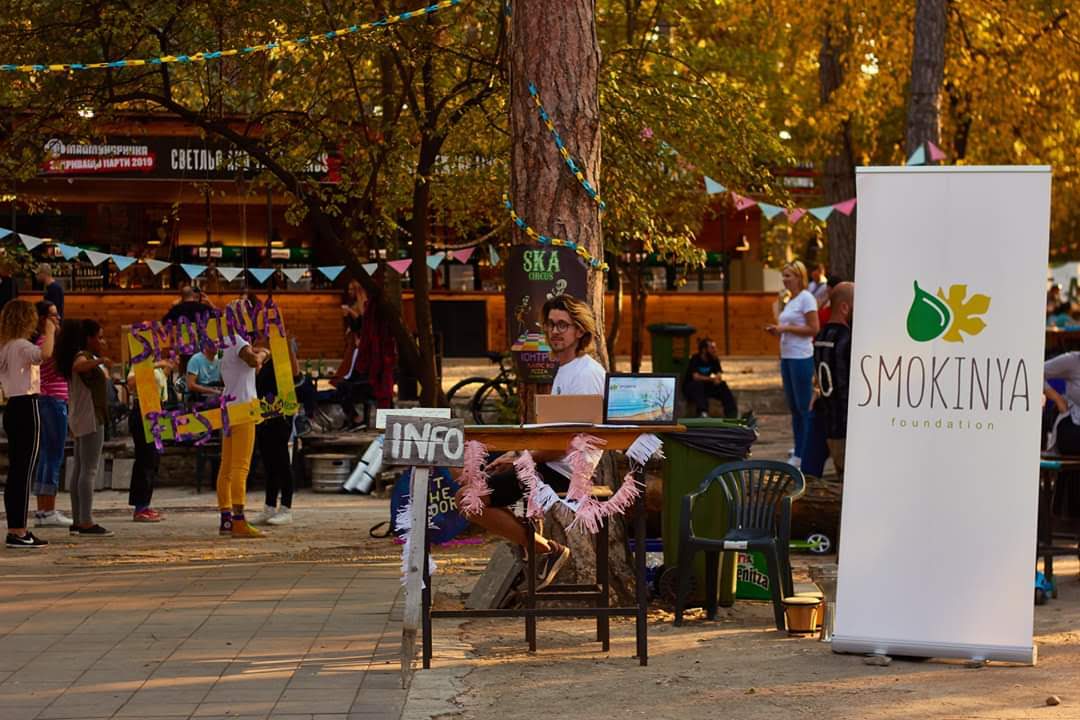 Looking back at the festival I am so happy and grateful that everything happened exactly as it did! The journey to make it happen was a long one too. Starting off with infighting and no team spirit, ending with the team having a common vision – we are excitement!
The fact that I made this happen makes me wonder how much more can I do..
Here’s how it was for me from the beginning. 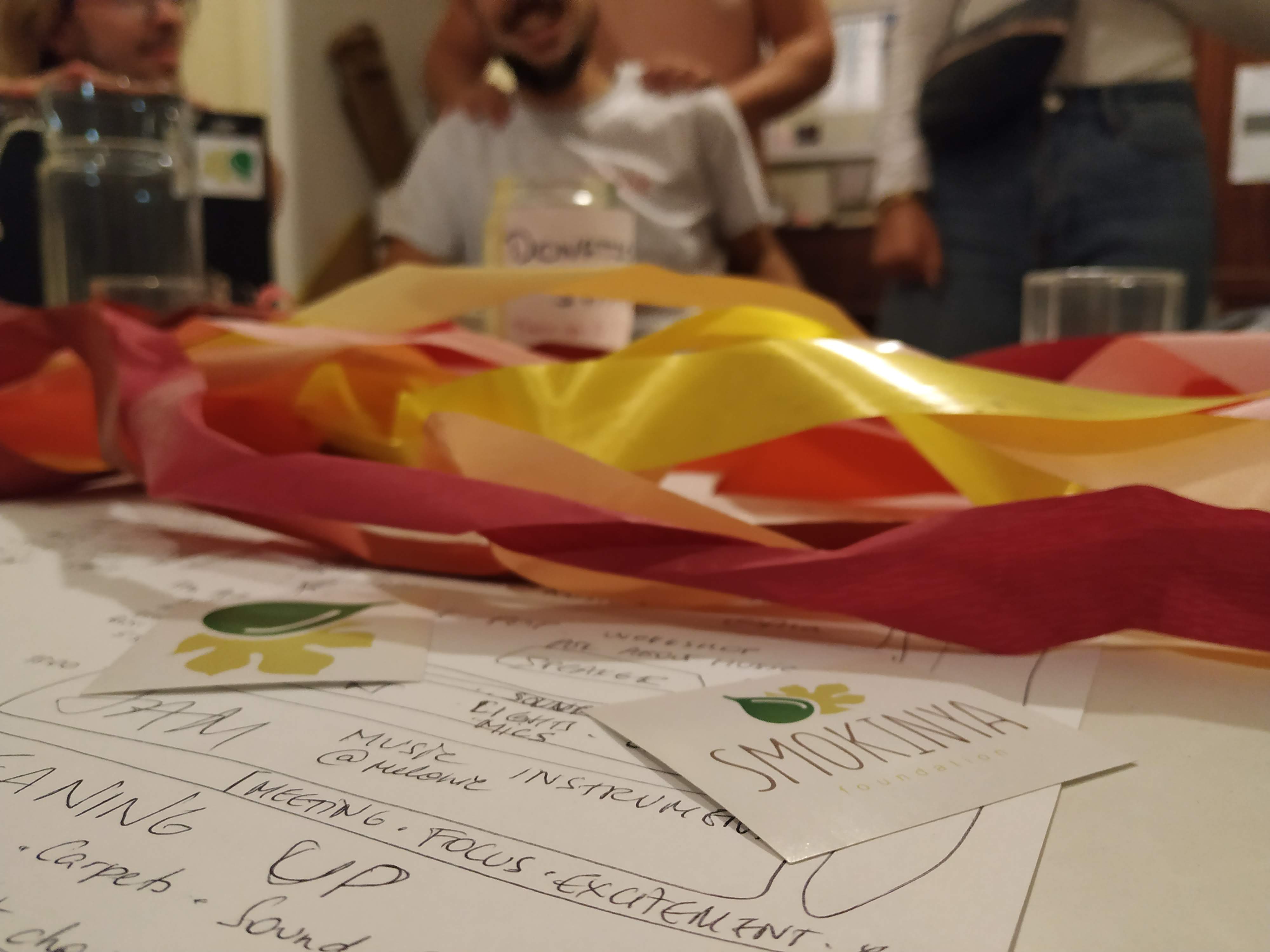 What would you do if you weren’t afraid?

On a late September evening I was watching a YouTube video suggested by my dear friend, and over everything that was said, there was a question – what would you do if you weren’t afraid?
After the video I was pondering on the question and it crossed my mind – if I wouldn’t have fear, I’d already made a festival, the only thing that’s stopping me is fear to fail.
Since I came to Bulgaria to volunteer I had this festival in mind, but I was making excuses and the most popular excuse was – it’s too late (to be great). I have to admit – I actually convinced myself that it’s too late to start organizing a festival already in April (ha.ha. I know).

Is it really impossible?

Next thought – what am I afraid of? Is it really impossible? I understood that the only thing that’s keeping me from organizing the festival is fear, and that nothing is impossible.
It seemed a bit crazy, nevertheless that night I used a tool that I learned at Smokinya “Home Is” training – I made a Circle of Creativity and fully planned out the festival.
And sent it to my team.

The Circle of Creativity starts with a reality check – and as I was overexcited about my sudden inspiration, I really thought that I don’t need anyTHING to make the festival happen. I had all the passion and all the people I need. I was basing my idea on fearlessness / my courage, inspiration and creativity. Well, basically all the energy I had at the time that was driving me to do this.
The next day in the office our director – Tisho told me to come back down to Earth and really think about what do I need to make this happen, so I decided to ask for help.

Luckily I knew Elina – she is organizing recurring Щък – Tук – Tам festival around Bulgaria, where I usually participate as a volunteer with my slackline so I knew whom to ask about all the practicalities.
She told me everything about organizing festivals and gave me some personal tips about the process that turned out to be very useful:
– don’t waste too much energy to diversify the program, don’t change the plan
– don’t mix work and home relationships, don’t have work related meetings at home

After I had a very specific plan in mind, I had to pass it to the team. And afterwards I had a two week training planned so I had to leave trusting that everything will happen without me…

At the time my relationship with one of the team members was so bad that nothing could save the festival if it wouldn’t change. All members of the team suffer when there is some friction between the two. As we live together we were bringing home to work and the other way around.

I imagine it’s not hard to guess that when I returned almost nothing was done and we had two weeks to go.

What do I really need to make something happen?

Well the most important thing is THE TEAM! After I returned from the Video Impact, I still wanted to make it happen, so I had to overcome my inner struggle with the team. I think communication was the hardest part. I even involved my Latvian friends asking for tips and suddenly I realized that the struggle is in my head (it hit me hard). Knowing that, I realized that the festival is going to be amazing not because I have done something in some specific way, but because I am amazing! ohhh.. everything changed at that point, I was happy and loving towards my team and they responded in the same way. Since that point basically everything was a miracle!
A successful team has a common vision. We all have different goals and if we are not going into the same direction, we are not together, it’s not even a team. Setting a common vision helped us to recognize how we are going to make this happen together.

How everything comes together

This festival was an idea that needs to be allowed to manifest itself. One good example is the FB event cover video. Before going to the Video Impact training I had 1-2 days to make a short video but I didn’t have a plan. I decided to make something for the festival. I didn’t know what would be the activities, I had no performances. I had no experience in video making and I had to make it on my phone.
In the process I learned that if I allow the creativity to flow bit by bit the whole thing comes together. Sometimes a thought comes to my mind, sometimes it’s improvisation. The important thing is to allow it to come easy. Everything comes at the right time. Even if the time is very limited.
There is something that pops first in the mind – I just write it down, in huge chunks – just keywords, ideas, vague sketches, nothing detailed, with time the details come, when it’s time for them to arrive.
Allowing things to have (to come at) their own time is important. By forcing the result, it’s created by overthinking which makes things pragmatic, logical, less creative, or maybe not creative at all. This was the key to not loosing my chill about what’s coming. 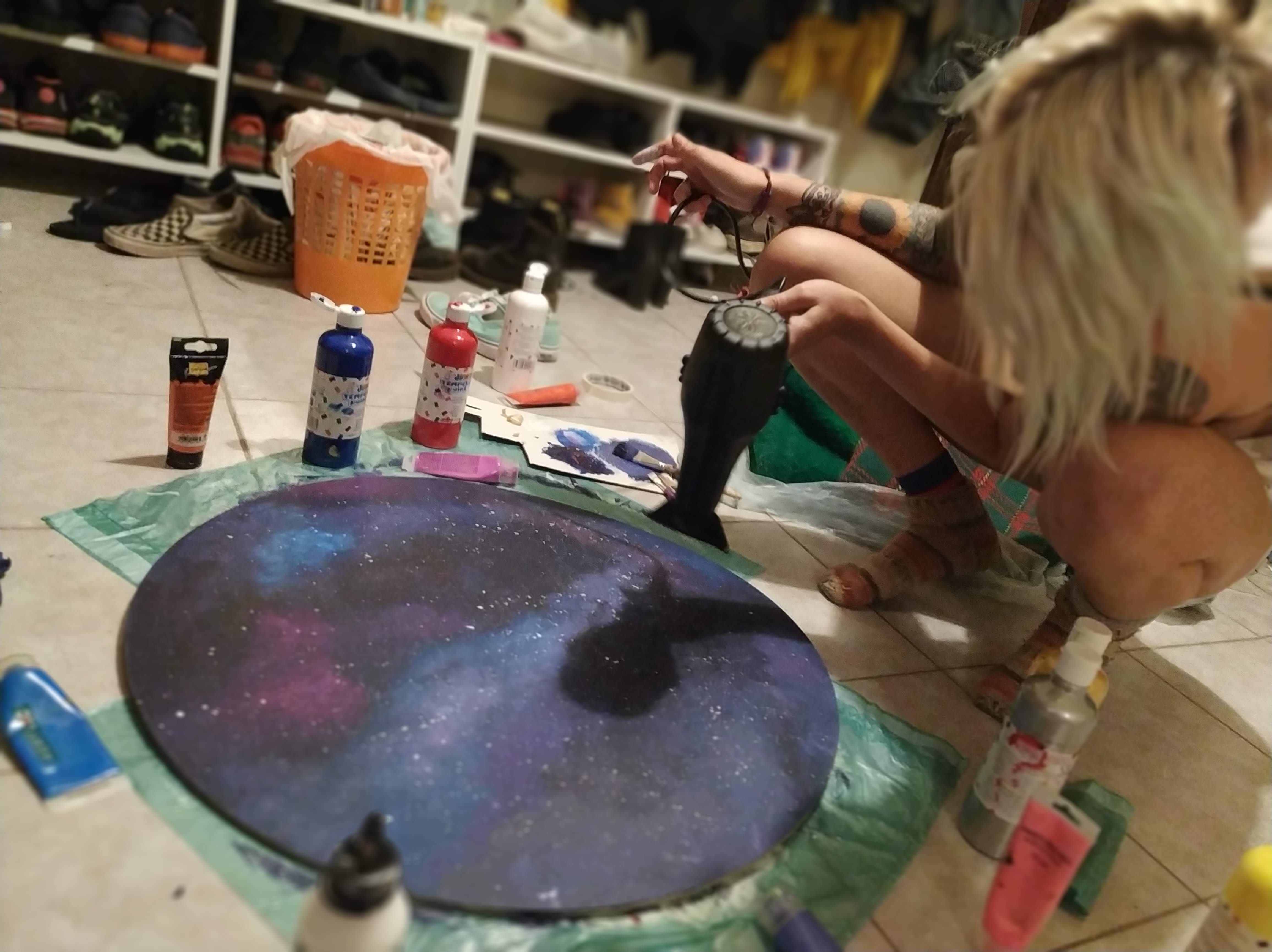 I wanted to enjoy the process to make the festival as painless as possible, because it was inspired by creativity, easiness and flow, I didn’t want to struggle with it and I managed to succeed with that most of the time 🙂 Cause what’s the point in creating something beautiful if it doesn’t make me happy?

The workshops / activities were coming to me one by one too, I knew some people, others appeared over time. I met Sheetal – henna artist at our friends exhibition and we were hosting her for a week or so, I met Vanya from K-pop workshop a weekend before the festival and I had a space in the schedule for her workshop too, Salma wrote me two days before the festival that she’s ready to perform and as easy I could still add her to the program. And so on. Unbelievable, isn’t it?

Low budget.
As we wanted to keep it low budget, I spent a lot of time just searching for the materials, doors for graffiti, carpets for the dance floor, decorations for the space and so on. Everything started to come our way. Like magic carpets – they just appeared! One given by our administrator Polin, one was just left on the Maria Luiza street spotted by our Latvian friend visiting Bulgaria for basic synergy training, one of them found by our team while bringing the doors to the festival, I can’t even explain what needed to happen for all these coincidences to happen.
Together we were looking for surfaces for graffiti too, and we found some random doors that we could use. 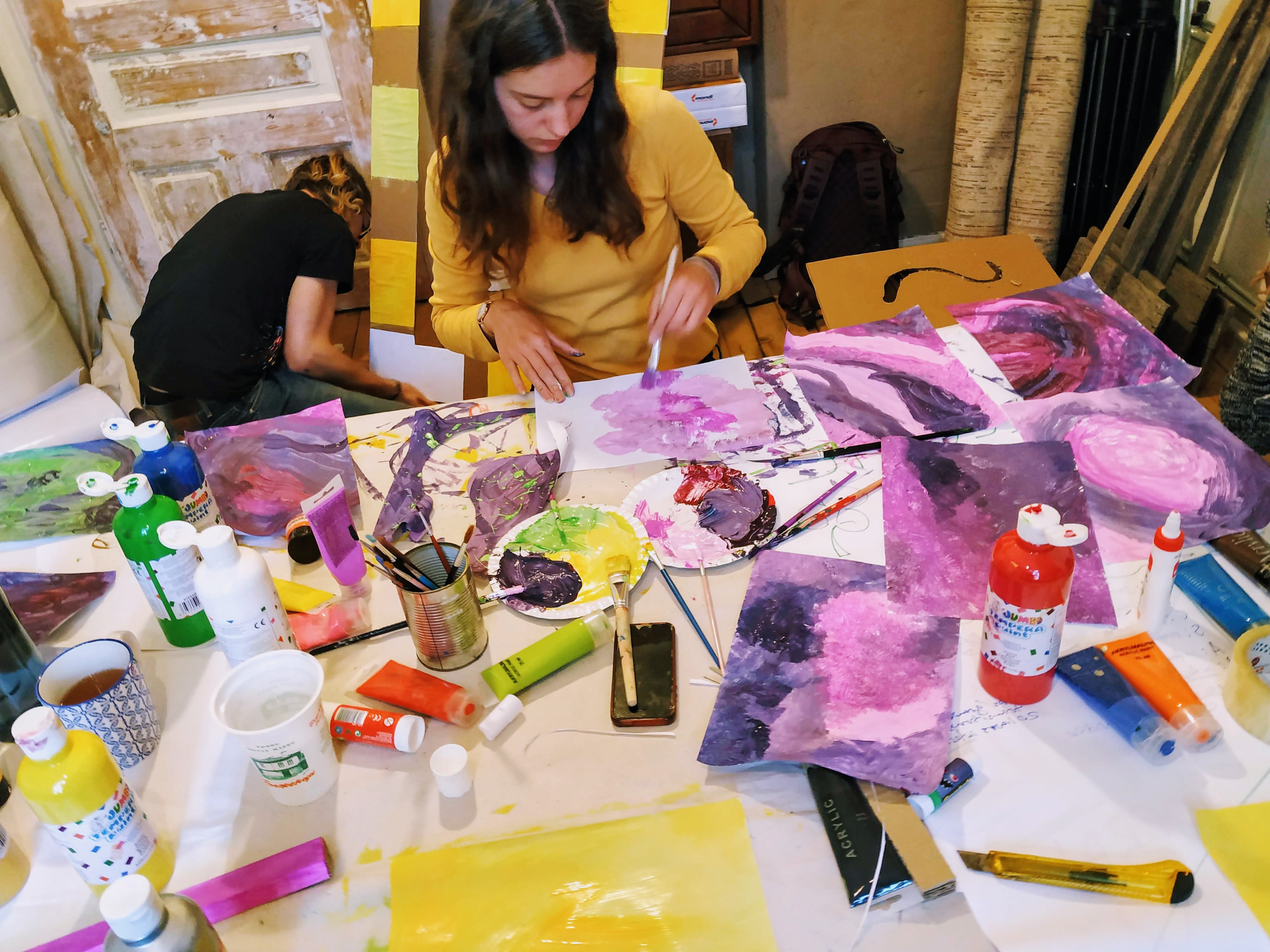 Other fun part was making our colorful #SmokinyaFEST photo frame. We spent two days randomly coloring papers, cutting them and making letters in our office. We had a lot of fun together being creative, inspiring each other and getting to know each other better. I was happy to fully concentrate on the creative process, being there 100%. Even though in my head there could be 100 other things to pay attention to.

Fresh energy
Last days before the festival, Kristina returned from her vacay, she brought fresh energy to the whole team, she was ready to do things and I want to say special thanks for her support, as she took the bossing role there, which was important but so unnatural for me to take. (Love you Kristina)

The final week was crazy, we had so many tasks on our ticketing system that it wasn’t possible to handle. I decided to put everything on the wall in our living room. With the visible board we managed to finish 37 tickets that week – me, Melanie and Ricsi, with the help of our support group – Alex and Dita (thankyouuuu)

Communication is the key. Maintain contact – people appreciate a lot when they are up to date about what’s going on. It’s important to show how important they are. For me the performers were the most important part of the festival and making them happy will make .. basically everyone else happy too.

Living with the team sometimes makes the work harder. When we had some disconnection at home I felt it at our meetings, the week when I felt most disconnected with my team, I was so lost.  Thanks to Elina, I knew what to do – I went to resolving the issue as soon as I recognized it.

The power is in the team. This is proving itself every time when I do something, lately all the teams I’ve been working with are doing magic and I’m just astonished by what a group of people can so together.

On the day of the festival I couldn’t believe that this is real. Less than 2 months ago I was sitting on my couch, thinking – what would I do if I weren’t afraid, now people are here and this is really happening.

I was and still am full of gratitude and love towards everyone who helped me to make this happen I could’ve never done this without you, you beautiful people!

Thanks for the trust and all the work and love and excitement that was there and see you at our next events!

Huge thanks to all of the team members who were part of this festival – Kristina, Melanie, Ricsi, Alex, Violin, Atanas and Dita! ♥

And big shout out to all the performers/artists of the festival – Vilius, Karin, Vanya, Georgi, Nash, Toni, Gabi, Ayubu, Snena, Frank, and Salma! 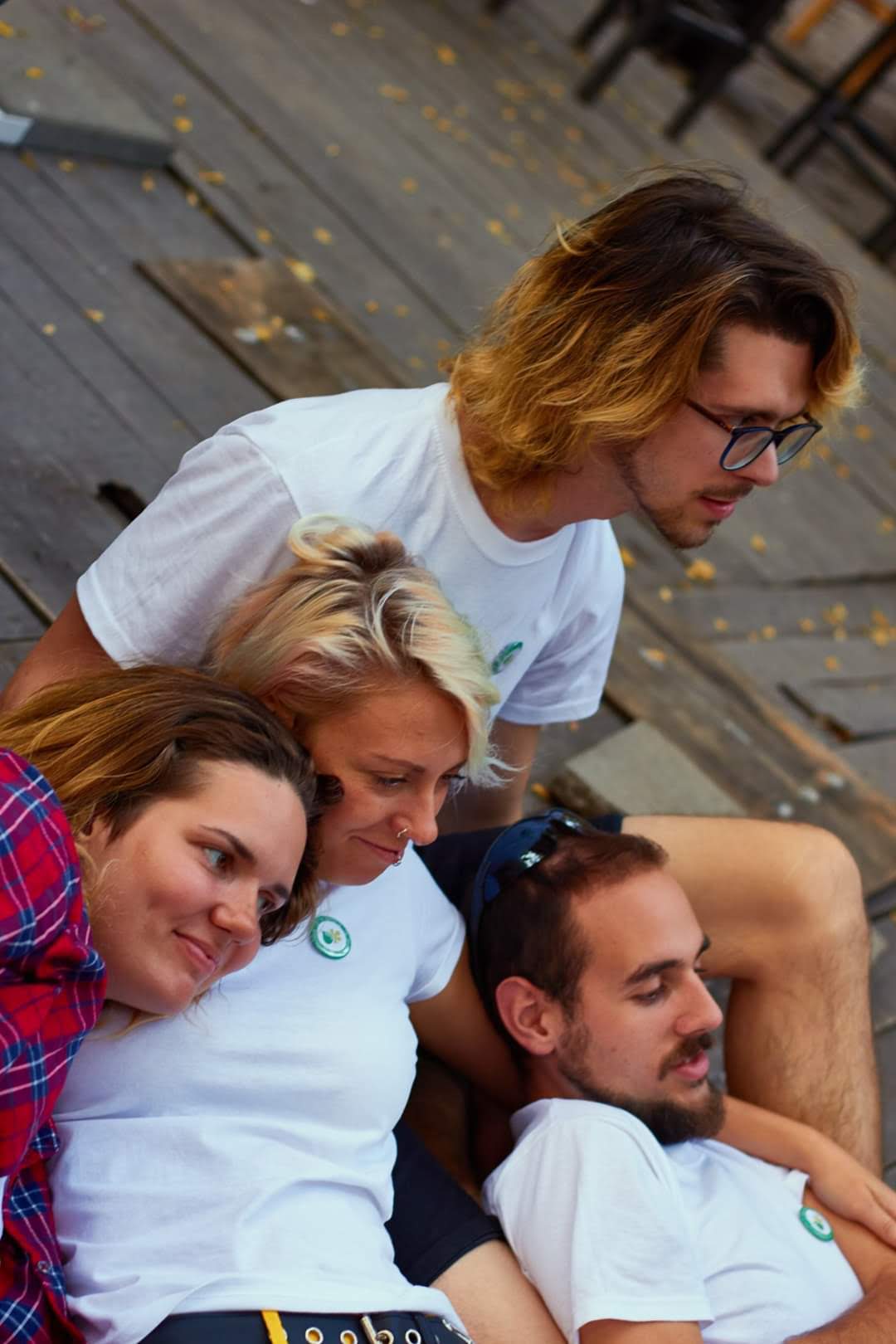 Also thanks for the support – Smokinya Foundation and Erasmus+ program!

Find us also at:

This program is co-funded by the Erasmus+ programme to support education, training, youth and sport in of the European Union.